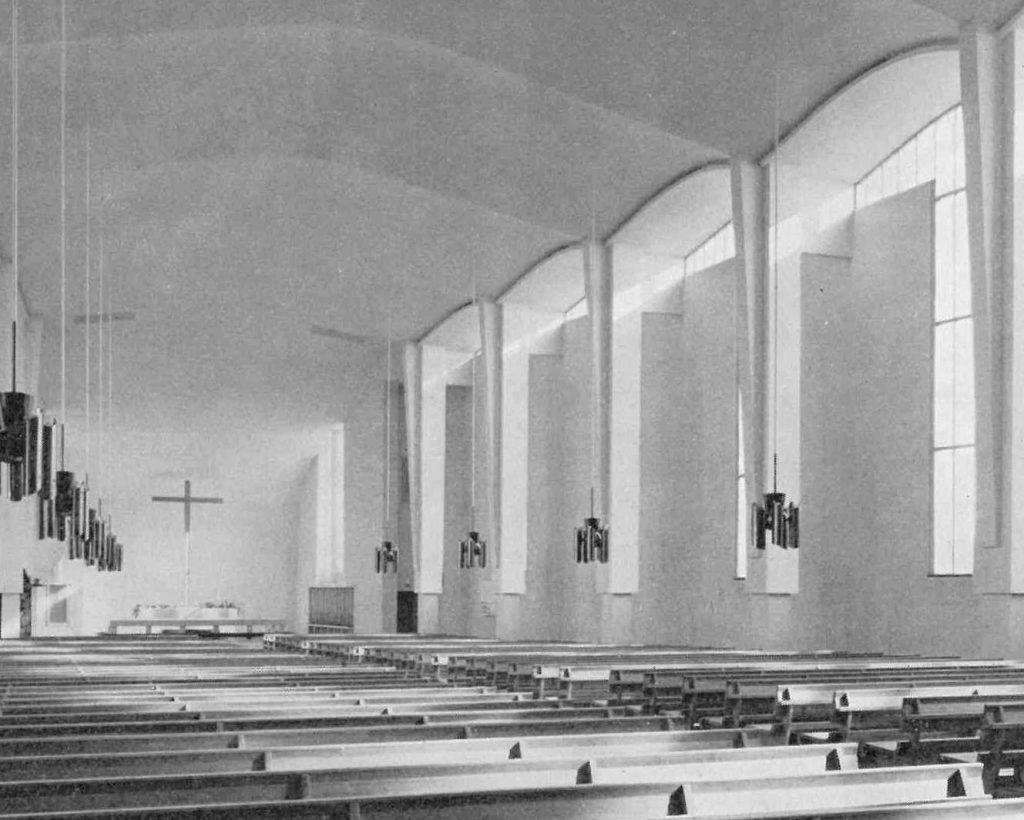 I arrived in Seinajoki on Sunday at 10:45, a few minutes before the service in the Aalto church was about to begin. It was raining steadily, and I noticed there were hundreds of people about, all wearing clear plastic rain parkas over traditional Finnish outfits. I didn’t pay much attention to it, and started approaching the church up the central staircase across from Aalto’s iconic Town Hall. Arriving at the top of the stairs, I was surprised to find a broad lawn in front of the church, but no walkway to the entrance. What a wonderful way to present the church in relationship to its site, creating the outdoor room first, enclosed by buildings on three sides and a row of trees on the fourth. The lawn was soaked from the rain so I descended back down the stairs and walked around to the side where there was a stone walkway leading to the corner entrance. I was walking alongside dozens of mostly older Fins in traditional outfits, all going to the church as well. When I arrived inside the narthex space, I was astonished to find the church was filled with people, over 1,200 in total. It was the biennial celebration and gathering of families that had been displaced when Russia annexed the Karelia region of eastern Finland during WWII. When the Russians annexed the area, the Finnish people migrated west to what is now central Finland. Every other year since the annexation they have gathered to celebrate a service in memory of their ancestors who were forced from their homeland.

Seeing 1,200 people in traditional dress taking communion was a very moving experience. There was a buzz in the air, old friends reconnecting and excited to be together. The church was alive with community and fellowship. Despite the rain outside, the atmosphere inside the church was bright and cheerful. The interior is almost all white, with eight pairs of columns on either side and tall, thin windows reaching to the ceiling bathing the interior in a soft, quiet light.

Looking inside, there were six lines for communion and the ministers were very busy dipping bread in the wine, administering the sacrament. The choir was singing in the background to the rich sound of the organ. The acoustics were bright and clear. I could hear every note. There was no reverberation from the organ or choir in the rear of the church, but the voices from the congregation could be heard across the space, creating a soft undercurrent of sound, the joy of the community coming together again.

The organ’s volume increased and the congregation began singing a traditional hymn in Finnish. Everyone’s energies began to align. Then the minister raised the cup and everyone was silent. He took the Eucharist and said a prayer, and the choir and congregation began singing the Kyrie eleison. The sound of the organ and voices filled the space, it was rich and full and the church came alive like a pulsing chamber, fulfilling the space as if it was meant for that sound.

Before the Kyrie the space was magnificent in everyway, but with the sound of the organ and singing it became complete. The music filled the sanctuary with spiritual joy and energy. I was very touched and felt a deep sense of peace and connectedness.

My experience that day was one of sound, the full sound of the organ and choir filling the beautiful, light-filled space of the church to make it come fully alive. A five-element analysis would normally lead me to think of the space as a place of stillness, contemplation, which it certainly is. It is also simple and white, reflecting the stillness of the winter element, when we turn inward to reflect and listen.

However after reflecting on my experience in this church, I have come to realize there was a sweetness to the experience, a spiritual fullness that in a five-element way could be described as sweet and fragrant, full of flavor like the harvest. It would be the late summer earth element, and the haptic sensation would be taste.

The five-element sound for the earth element, curiously, is singing, as in the earth singing and celebrating the sweetness of life. My experience that day was so rich and delicious, I could taste it.

Aalto designed this church for the community. It is not a chapel, but a space for 1,200 people to gather for a shared spiritual experience. The lawn that I discovered on my initial approach to the church is the architect’s first clue that your experience of this place is not meant to be as an individual. The lawn is large enough for 3,000 people, and if you enter that space you feel the potential of community. If you walk around and approach the side entrance, you will be walking with others, again bringing you immediately into a sense of community with others, and there is nothing sweeter than feeling a part of a larger whole, a part of a connected family.

This is a widget ready area. Add some and they will appear here.