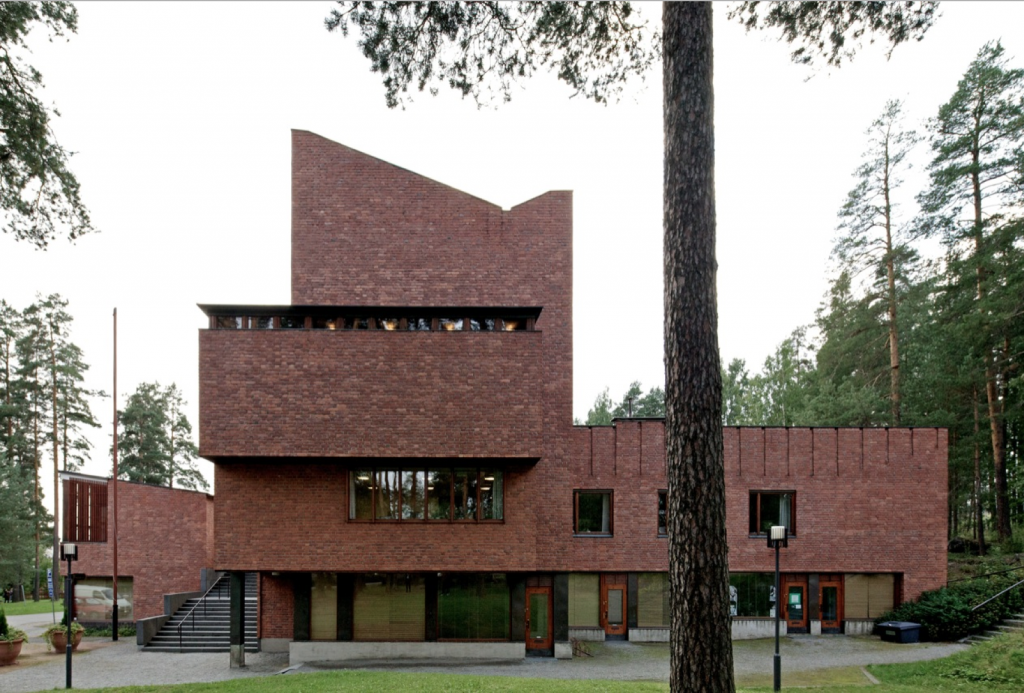 I visited Aalto’s Saynatsalo Town Hall on the summer solstice. It was cool, overcast, and raining. The night before, the sky never got dark. At midnight it was as bright as 8:30 PM in Maine. I drove to the village of Saynatsalo after breakfast, a short distance south of Jyvaskyla. The road goes through the village directly to Aalto’s town hall, which is sited on top of the hill in a pine forest. On approach the building has a very strong presence and personality as if it is reaching out to greet you. It is very assertive, confident, warm, and friendly. I stood outside taking in the scene, getting to know the building first hand. After circling the site for a few minutes, seeing the overall form of the building and the cascading stairway on the southwest corner, which hints of the courtyard above, I returned to the entrance and started up the staircase.

I could feel the presence of the tall brick wall of the council chamber as I climbed the stairs (its probably 35-40’ tall), but at the top of the stairs, I experienced the surprise and intimacy of the interior courtyard. Of course I knew it was there, but it was still a delight to encounter first hand. In contrast to the tall, vertical wall of the chamber the courtyard is low and horizontal; in contrast to the heavy, stone base and brick walls of the chamber, the courtyard is light, surrounded by wood windows and landscaping that climb the walls, softening and dematerializing the enclosure. 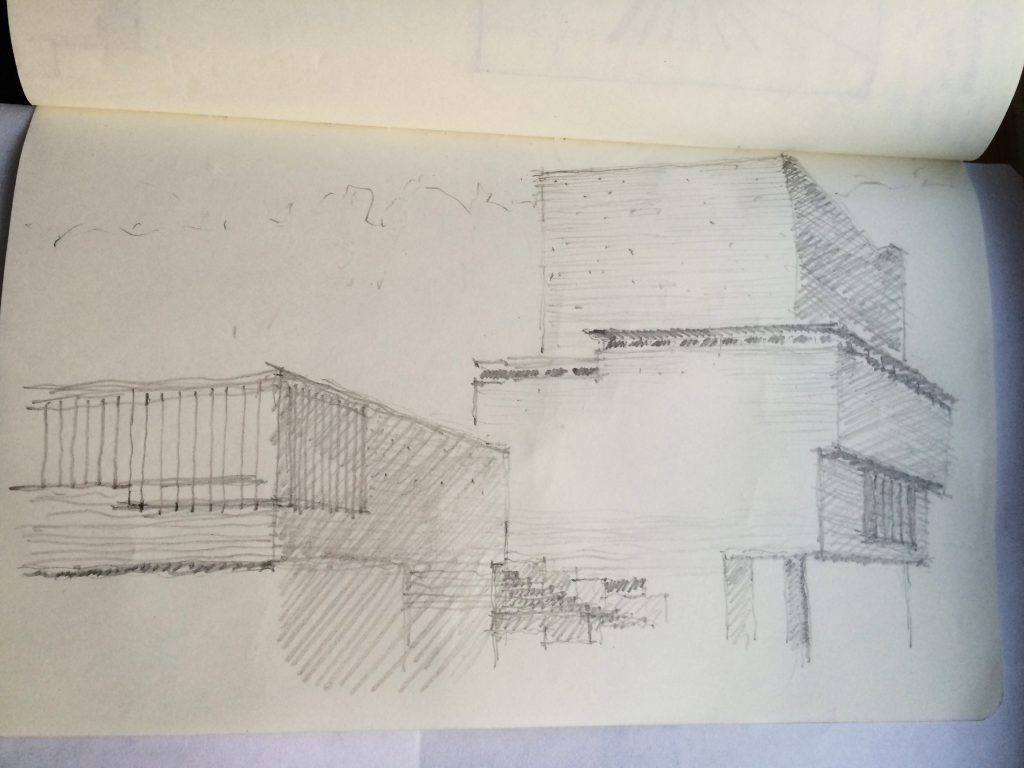 After taking in the courtyard for a few minutes, I turned and entered the building under a modest canopy. Inside there is a small café, shop, and gallery displaying Aalto’s original competition entry and the final, as-built scheme. The competition entry is very simple, almost boring: two gable-roofed wings in an “L” shape, both two stories high. There are no drawings in the gallery showing the evolution to the final design, but it was amazing to see the change. It was almost as if Aalto was a new architect with a different approach in the final scheme. His approach to the design was entirely new and fresh. Whereas the earlier scheme addressed the programmatic elements in a straightforward, traditional way, the final scheme took the program and created a unique partie and building form that challenged the community to engage in a new way.* 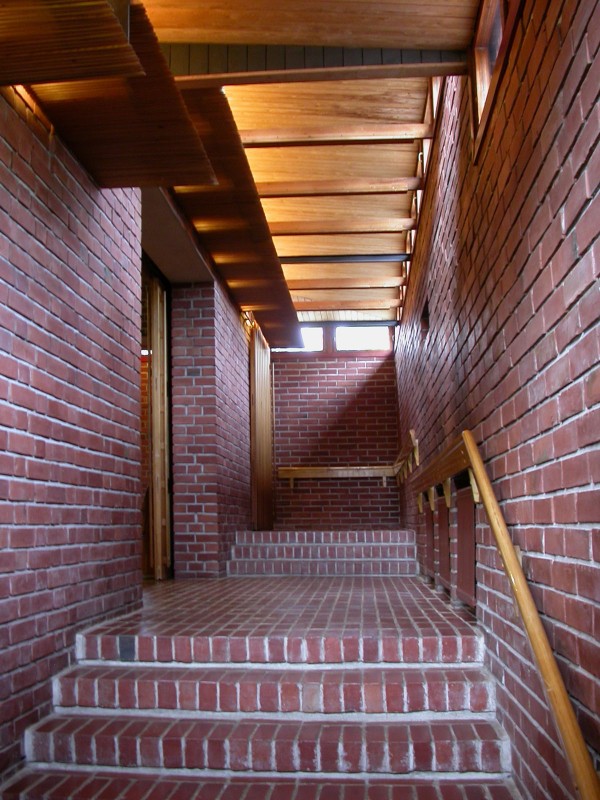 What I like most about the final building design is its organizational concept: shops on the ground floor to make it an active part of the community, offices on the upper courtyard level, bright and sunny, easily accessible to the community, and the council chamber on the top floor, the higher ground. It is a nice sequence, climbing the stairs to the entry, discovering the courtyard first, then the entry, then the staircase leading very gradually to the chamber, with shallow steps, all brick, turning three times until you discover the tall, dark chamber at the end, very solemn and quiet. The chamber is dark with all brick walls and floors. There are very few lights and only the one large, high window on the north wall. The space presents a strong contrast with the rooms on the courtyard level, which are all pleasantly bright and cheerful, and the hall surrounding the courtyard which is very bright, almost outdoors in feeling.

Aalto’s composition is one of contrasts. My eyes were constantly adjusting to the changes, experiencing the different values and characteristics of the light and form. There is the contrast of materials from black granite and tile at the base to red brick above, to wood window frames and ceilings, to the white walls of the interior hallway and offices. There is the contrast of light from the full sunlight of the courtyard, to the brightness of the hallway on the courtyard level, to the warm light of the offices, the progressive dimming of warm southern light along the stepping hallway leading to the chamber, and finally the darkness and diffuse north light of the council chamber. There is the contrast of mood as well, from the sense of community and activity at the entrance, to the sense of delight and surprise upon discovery of the courtyard, to the sense of compression at the entry, the warmth of the surrounding hallway space, the compelling curiousity of the hallway leading to the chamber, and the quiet seriousness and stillness of the chamber itself. Juhani Pallasmaa says “the dark womb of the council chamber of Alvar Aalto’s Saynatsalo Town Hall re-creates a mystical and mythological sense of community; darkness creates a sense of solidarity and strengthens the power of the spoken word.”

The Saynatsalo Town Hall is an experience for the eyes, one of discovery, variety, and contrasts. It was a breakthrough project for Aalto, transforming his original “L” concept into a rich, courtyard design that created a shared garden space for the community. Many more town halls would be designed using these same themes in the years to come (Seinajoki and Rovaneimi, for example), but this was the first. With it he pushed the limits of materials and light to create a rich palette of contrasts and spatial experiences.

It was not obvious to me at first, but I have concluded that the five-element season for this building is spring, and the corresponding material is wood, not because there is a lot of wood used in the building, but because the spirit of the building, the essence of its creation, is that of hope and optimism, looking for new ideas, and reaching for the light. It is the energy of adolescence and individuation, a time of experimentation and re-defining of ourselves. The sense organ for spring is the eyes, seeking the possibilities, keeping your eye on the goal. Aalto pushed into new territory with this building perhaps from loss of his wife, perhaps because he wanted to break out again as he did with Villa Mairea and make a statement about how communities should come together in their public buildings. His original competition entry was transformed into a new paradigm for town halls that would find worldwide acclaim and recognition for Aalto. The Saynatsalo Town Hall is a building where the eyes are engaged in a new way through the use of contrast, from the bright sunlight of the courtyard to the quiet darkness of the council chamber. These spaces were purposefully designed for the people of this community, and both aspects of light, the joy of sunlight and the mystery of darkness, are engaged for the benefit of community.

This is a widget ready area. Add some and they will appear here.